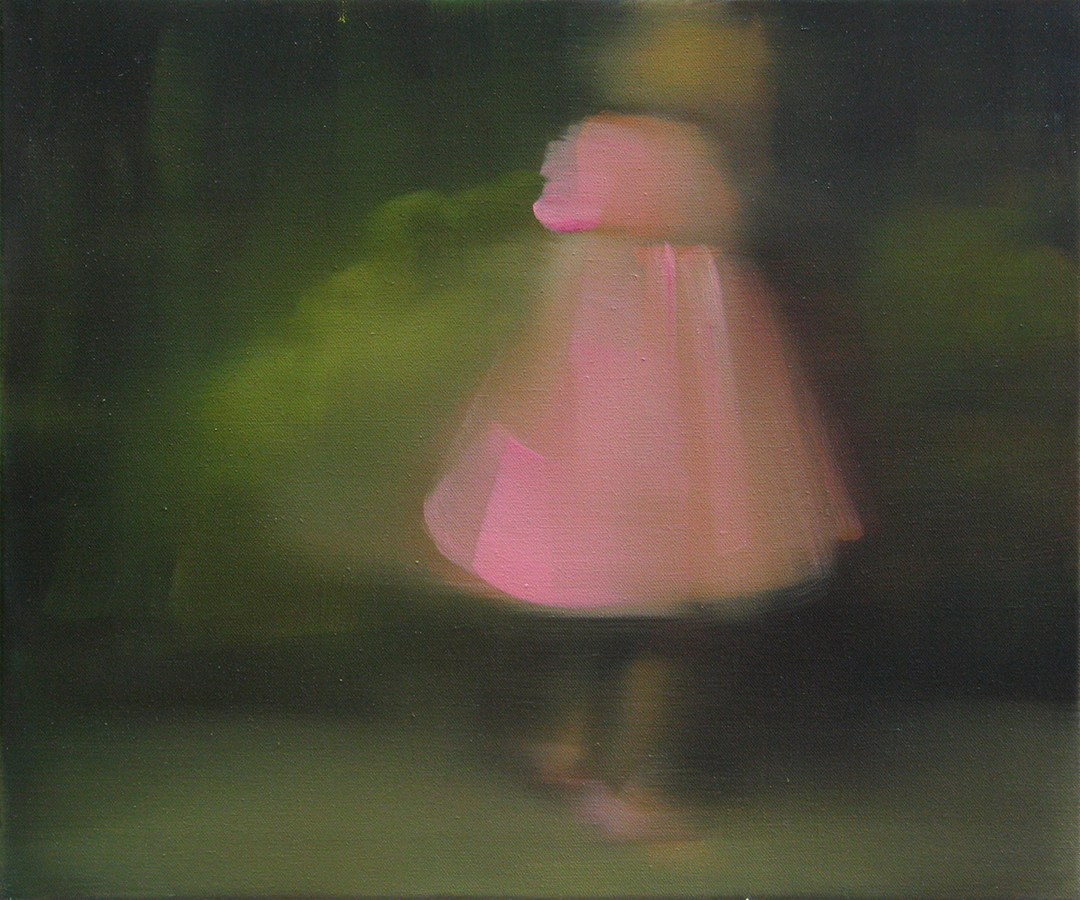 From the publication  The Body In Women’s Art Now, part 2 – Flux

Three of the artists in this exhibition, Tiina Heiska, Sara Lederman and Helen Carmel Benigson, focus on the precarious tipping point between girlhood and womanhood. Heiska’s paintings are like blurred photographs, conjuring the fluid jelly of the eye, a vision through tears. Her work relates to the female Surrealist tradition of Toyen and Dorothea Tanning. She employs a filmic language, the language of Alfred Hitchcock and David Lynch, and also the language of Cindy Sherman.

Heiska makes paintings like a series of ”stills” that imply but do not reveal the storylinens. They suggest a sinister voyeurism or surveillance, but also that we might be participants in the scene we are looking at. There are ”existential games of dressing up” going on in these works. Luridly coloured shoes, stockings, dresses, bows are vivid against murky backgrounds just discernible as dark forests and bleak hotelrooms. ”Her characters are caught in a snapshot but rendered lasting in the durable medium of paint…there is a longing for the moment, the instant where everything can still happen”. These are spaces where the presence of another person can be sensed but not seen. The paintings have teh kind of haunting associative vividness,  the hard-to-pin-down-ness of memories and dreams. We may be looking at menacing sexual scenarios but this is not entirely clear. Heiska’s titles are important clues. In Growing Small (2008) there is a reverse development from middle-aged woman back to child but the older women in the series are still child-like, doll-like, aping a cultural stereotype. But in Butterfly Caught (2006-08) the vivid pink color of a child’s dress stands out against a menacing brown-green background. The title suggests that Heiska’s female characters might be pinned down, taxonomised. Young women and girls are reduced to the vividness of their clothing or the curtain of their hair (Red Riding Hood and Goldilocks also feature as series titles). Heiska’s protagonists recede further and further into the abstraction of the background.

There is an ambiguity in a lot of Heiska’s paintings about what has happened to her female protagonists – are they abandoned,  raped,  murdered or simply asleep. This is ground that Sherman has also traversed. There has been a lot of literary exploration of female sexual fantasy ranging through Anaïs Nin, Erica Jong, Pauline Reage’s  The Story of O (1954), Nancy Friday’s My Secret Garden (1973) to,  more recently Catherine Millet’s The Sexual Life of Catherine M (2002) and Belle de Jour’s Diary of a London Call Girl blog (2003). Heiska’s word treads the line between fantasy and reality and it sometimes seems as if fantasy has turned against her female protagonists. Victimised,  abject,  abused,  prostituted: these are tropes that feature in female sexual fantasies and in the cultures that they emerge within, but they aren’t things we really want to happen to us.

Tracey Warr,  from the publication  The Body In Women’s Art Now, part 2 – Flux