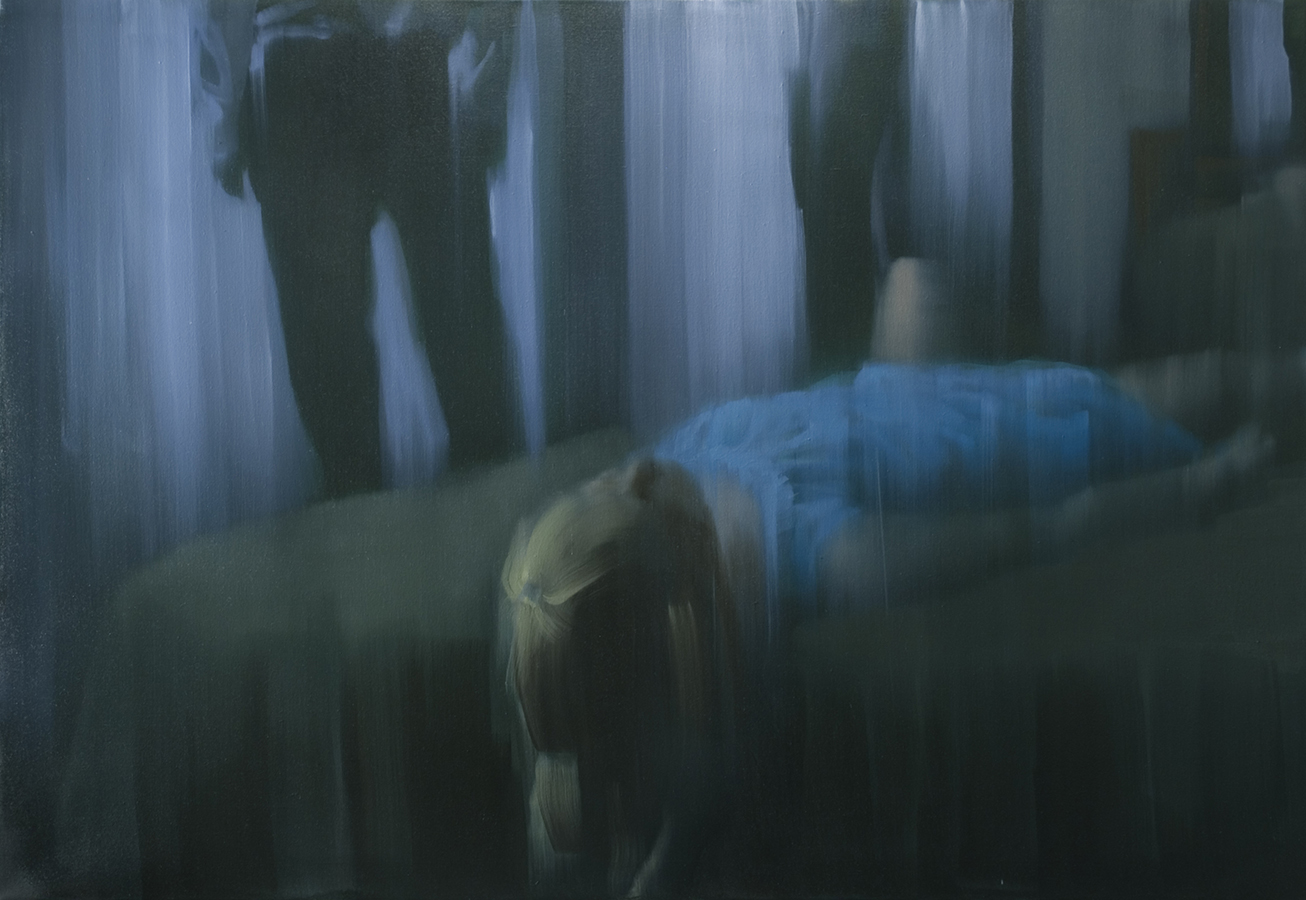 Intrigued by Cindy Sherman’s Untitled Film Stills and Bill Viola’s slow motion videos, Finish artist Tiina Heiska has been occupied with the dialogue between photography and painting. Her series Eclipse is based on Michelangelo Antonioni’s film L’Eclisse. She says she directed her own painted version of the film and juxtaposed her own images to those painted after the stills from the movie, and ads, ‘I’m always trying to reach a point where it seems to be on the verge of changing into something else, like in films the frame blurring when it’s just about to change. I am also enthralled by the fact that the fast movement caught in the photo changes when is painted through a comparatively slower process.’

— Would you compare your canvases to a screen?
— I think that my paradoxical position as a painter is that I actually would want to deny the very nature of painting as a still, material and hand-made object. I’d like to make it seem like a reflection of a fleeting moment captured on the canvas like images on the film screen do. Anyhow, struggling with this contradiction has basically become the very essence of my work, and I never really wanted to give up painting but have treated canvases as my screen.

— Do you prepare a set for your paintings, like a film director?
— I acquire some props, wigs, shoes, clothes and other accessories to get in the mood and create the atmosphere I’m after for the shooting sessions. For the series Eclipse and Hotel I rented a room in a hotel and asked my partner to play a male role whilst I did the female role.

— Do you work with artificial lighting?
— Lightning is very important in terms of atmosphere and composition, but for me it’s enough to decide from what direction the light comes from, and then turn off all the other light sources. Angles of the camera are more or less arbitrary since I use a self-timer while being busy acting in front of the camera myself. The role of the camera is thus similar to an anonymous observer, surveillance camera or voyeur.

— And how about narrative?
— For quite a long time now I’ve been painting series in which themes evolve from one painting to the next. I start by sketching a kind of loose story, but it usually goes through several transformations and ends up somewhere I never could have imagined. So even though the narration in my painting series refers to the construction of a film drama, it is actually realised very differently as it is told in the language of painting.

— A narrative is supposed to develop in time. How is this element present in your paintings?
— A film develops the element of time linearly and consists of a flow of images following one after another linearly, thus creating an evolving narration. What interests me is that a painting can be considered as a recording of time in depth, each painted layer overlapping a previous one and thus creating a narration stem- ming from it’s own genealogy. It is built from within, thus creating it’s own story layer by layer, gesture by gesture.